Even weak passions can be very damaging

September 04, 2020
"A crowd of emotions, even moderate ones, is more powerful than any single emotion would be, even at full force. He feels a desire for money, but a moderate desire; ambition, but not burning ambition; anger, but not unrelenting anger; restlessness, but not too nervous and uneasy a restlessness; lust, but not frenzied lust. It would be easier to deal with someone who had a single thoroughgoing fault than with one who has every fault, even though he has them in lesser degree. Besides, the degree of emotion makes no difference: regardless of degree, it knows nothing of obedience and heeds no advice. No animal, whether wild or tame and gentle, is swayed by reasoned argument: their nature is deaf to persuasion. In the same way, even the smallest emotions heed us not, hear us not. Lions and tigers never shed their savage nature: they may seem tame at times, but when you least expect it, their latent savagery is kindled again. We can never trust that our faults have been subdued."


What interests me in the passage posted here is how Seneca insists that even weak negative emotions can be very damaging - and, of course, even more so if it is a swarm of weak, negative emotions. Most of us are likely to think that we are pretty well off if we are not very angry persons or very depressed persons or very greedy persons etc etc - but Seneca is trying to show us that most of us are living lives with huge room for improvement. In fact, it would be fair to say that a major goal for Seneca is to try to wake us from our tendency to not just accept our flaws but to embrace them and, in some cases, even pride ourselves in them. 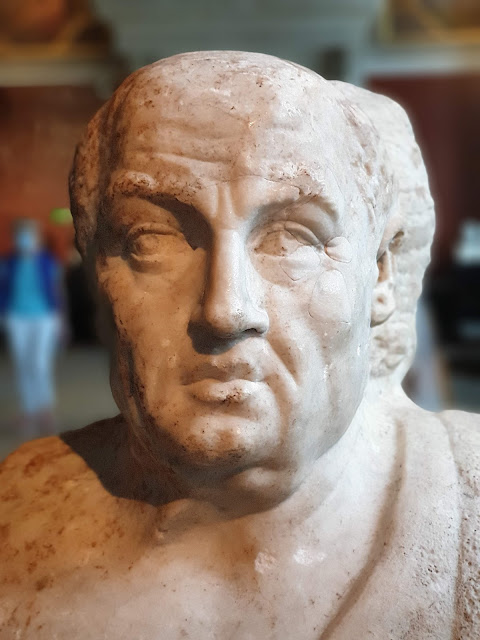 The only known bust that actually portrays Seneca is in Neues Museum in Berlin. Photo: Jannik Lindquist