August 01, 2019
I'm currently reading the book "Finitude and transcendence in Plato's dialogues" by Drew Hyland. It's not very long and fairly easy to read - so if some of you feel like reading along with me we could create a study group dedicated to that book.

Hyland shows that one of the most essential themes in Plato's dialogue is how we humans try to deal with the basic human limitation of finitude. Some resign and accept it - such as those who stop caring about what's it all about or those who cling to old, unlikely worldviews because they think nothing better is available. Some try to overcome it by desperate and/or agressive claims about human nature - such as the Greek sophists. Socrates - as we meet him in Plato's dialogues - tries to turn limitation into possibility: We are human beings and we can think. Let's find out what we can know about what it means to be a human being.

This both humble and sensitive strategy seems to be contradicted by Socrates ambitions in Plato's dialogue "The Republic" - so Hyland spend a good deal of the book to show that "The Republic" has been heavily misunderstood and that it is really completely aligned with the basic socratic project. In the course of this discussion Hyland heavily criticizes the idea that  Plato developed from being a "Socratic" into being a "Platonist". In Hyland's opinion, every element in Plato's thinking in all the dialogues is completely Socratic. 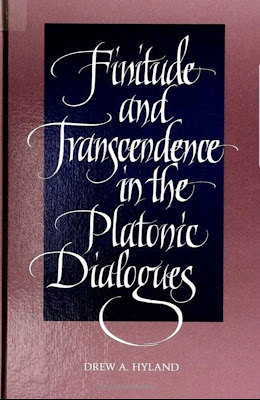